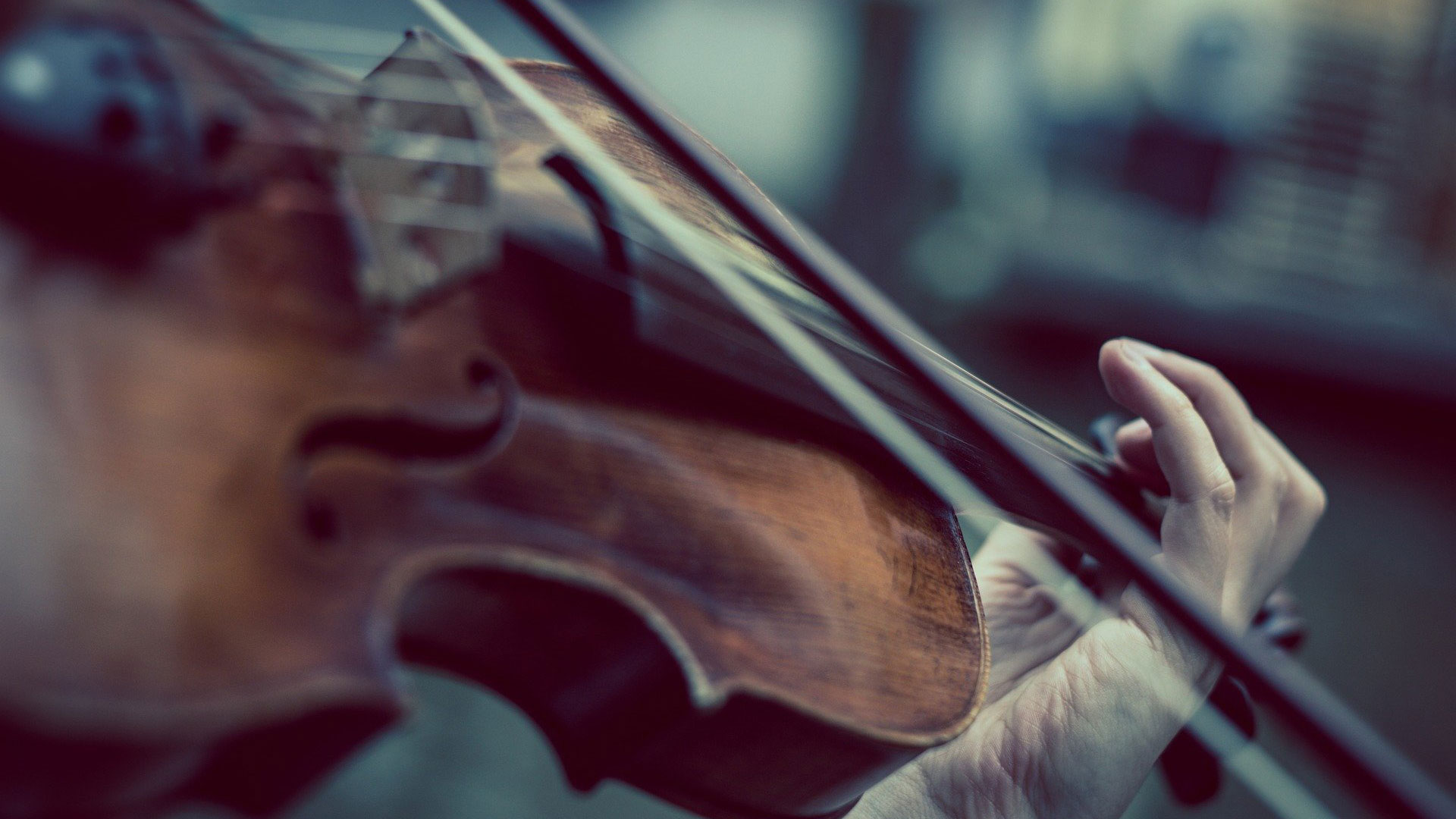 Based in the North of Somerset, Bold Brass was originally formed in 1977 as a quintet. The larger ensemble was set up in 1977 to play just one concert, which was so successful the band decided to stay together. Bold Brass has provided music for the Open University award ceremonies in Torquay and Cheltenham for over 18 years and for many years have been essential part of the Bristol Evening Post carol concert in Bristol. The group also plays at concerts in Churches, indoor and outdoor music events in the UK as well in former Czeckoslovakia, Germany and France.

Our players have many years experience playing in Brass bands, Jazz and Big Bands. Their repertoire is drawn from Brass band, jazz, big band and other popular forms of music. Many of their arrangements have been made by past and present members and musical directors.

And an action photo!

Laura Heathcote performs regularly across the UK. Having studied at the Royal College of Music and the Royal Welsh College of Music and Drama. Laura has gone on to perform at No.10 Downing Street, for United Nation summits and at the Royal Albert Hall, amongst other venues. Laura has recorded for the BBC and for worldwide televised adverts and regularly performs at weddings as a soloist and as part of her quartet, the Diamond String Quartet.

Stuart Phippen is an award-winning pianist performs an eclectic range including jazz, big band and classical music. He currently is in demand as an accompanist, soloist and teacher.

A stunning performance with virtuoso violin playing by Laura including, ‘The Lark Assending’ and ‘The Hot Canary’. Stuart provided brilliant accompaniment and a couple of solos including the Classic FM favourite ‘Le Onde’. 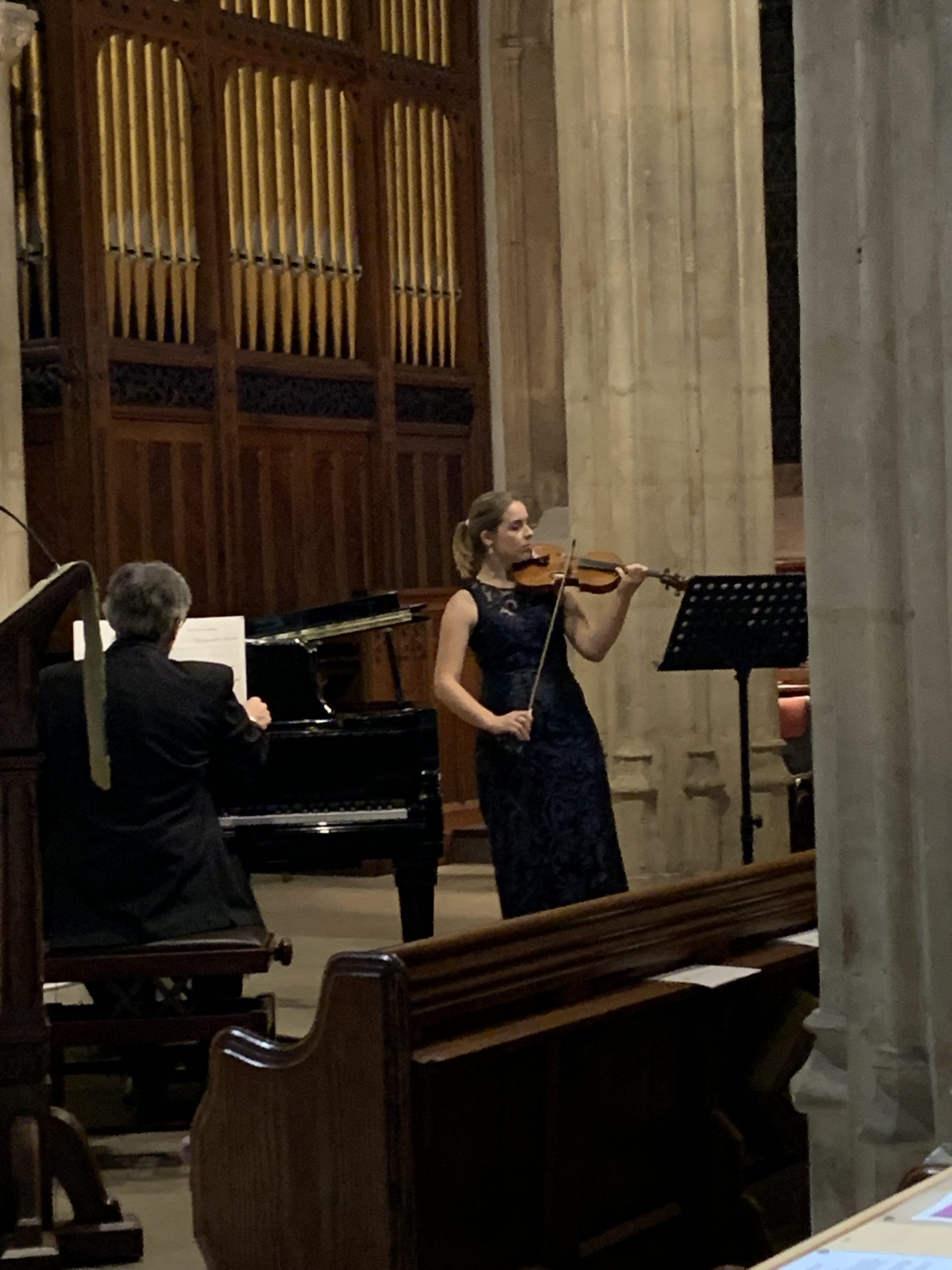 28th September 2019
Harry & Alisa Recital Duo (piano-cello)
Harry Nowakowski-Fox graduated as a Kendall-Taylor Scholar of the Masters in Performance course at the Royal College of Music in 2013. Shortly afterwards he was named as a Young Steinway Artist and won the special prize at the Valletta International Piano competition. He was also the 2015 Grand Prize winner at the Windsor International Piano Competition. In 2017 he founded the Harry & Alisa Recital duo with his wife, the Belarusian Cellist Alisa Liubarskaya. Alisa is a guest cellist at venues including the Orchestra of the Royal Opera House, Birmingham Royal Ballet Sinfonia, and the Scottish and Welsh National Opera Orchestras. Amongst her numerous awards are several first prizes and the Barbirolli Memorial Prize for Cellists.
Their music included memorable tunes from Tchaikovsky, Schubert, Brahms and Piazzola.

26th October 2019
David Bednall (Organ)
David is recognised as one of the leading choral composers of his generation. He was Organ Scholar at The Queen’s College, Oxford and then at Gloucester Cathedral. He also spent periods there as Acting Director of Music and Acting Assistant Organist and was closely involved with the Three Choirs Festival. He studied for a PhD in Composition at the University of Bristol and is signed to Oxford University Press. He is a Teaching Fellow and Organist of The University of Bristol, Sub Organist at Bristol Cathedral and Director of The University Singers. He has given recitals in many English Cathedrals, the La Trinité, Paris, and in 2008 he gave a recital at Notre-Dame de Paris. He has also appeared as stunt-organist on BBC TV’s Dr Who. His compositions are widely performed, broadcast on Radio 3, 4, and Classic FM, and recorded. His first CD, Hail, gladdening light, was a Gramophone Editor’s Choice, his Requiem received similar accolades, and Flame Celestial, received a Gramophone Recommendation.

30th November 2019
“iSax” Saxophone Quartet
“Everything you have wanted to know about the saxophone” – In the first half of the concert, iSax took the audience on a musical journey from medieval times to the present day.
“What does it matter if the saxophone didn’t appear until the middle of the 19th century?” – The quartet demonstrated the amazing ability of the instrument to interpret pretty much any style of music from the renaissance, through the baroque, classical, romantic periods to jazz and pop.
In the second half the quartet played a selection of music representing many different styles, including classical, show tunes from the musicals, and recent popular songs.

25th January 2020
Hollie-anne Bangham with Ffion Perrett
Hollie-anne, mezzo soprano, and close friend Welsh soprano Ffion Perrett, brought an evening of song, with repertoire from Opera Classics through to avant-garde music, show stoppers and unaccompanied folk songs. The evening was enjoyed by everyone. Both are graduates of the Royal Northern College of Music and between them have performed up and down the United Kingdom as well as internationally. Hollie-anne has recently been awarded the Simon Sandbach’s award and has worked with many prestigious companies including the English Touring Opera, and national opera festivals. She has had the privilege of performing as a soloist at the Notre Dame Paris and with the Ukrainian choir. Ffion has sung with many Welsh male voice choirs and has enjoyed much success in National Eisteddfods.

29th February 2020
Natalia Williams-Wandoch (piano)
Natalia performs as a soloist and chamber musician and has developed a wide and versatile repertoire with strong emphases on Romantic, Impressionist and contemporary music. Natalia gave her first full-length recital at 14, and performed the complete Op. 10 Etudes by Chopin in the composer’s house whilst still a student. She was enthusiastically received by the audience and critics in the 2005 International Chopin Competition in Warsaw. Natalia studied at music-specialising schools, before going on to complete her Master of Music degree with first class honours. She has won numerous prizes include winning every piano competition she entered at the Royal Academy of Music. For our concert Natalia presented a programme of piano music inspired by landscape and the sense of place. The recital featured works by Chopin and Liszt, as well as music by British and French composers.

We use cookies on our website to give you the most relevant experience by remembering your preferences and repeat visits. By clicking “Accept”, you consent to the use of ALL the cookies.
Cookie settingsACCEPT
Manage consent

This website uses cookies to improve your experience while you navigate through the website. Out of these, the cookies that are categorized as necessary are stored on your browser as they are essential for the working of basic functionalities of the website. We also use third-party cookies that help us analyze and understand how you use this website. These cookies will be stored in your browser only with your consent. You also have the option to opt-out of these cookies. But opting out of some of these cookies may affect your browsing experience.
Necessary Always Enabled

Performance cookies are used to understand and analyze the key performance indexes of the website which helps in delivering a better user experience for the visitors.

Analytical cookies are used to understand how visitors interact with the website. These cookies help provide information on metrics the number of visitors, bounce rate, traffic source, etc.

Advertisement cookies are used to provide visitors with relevant ads and marketing campaigns. These cookies track visitors across websites and collect information to provide customized ads.

Other uncategorized cookies are those that are being analyzed and have not been classified into a category as yet.